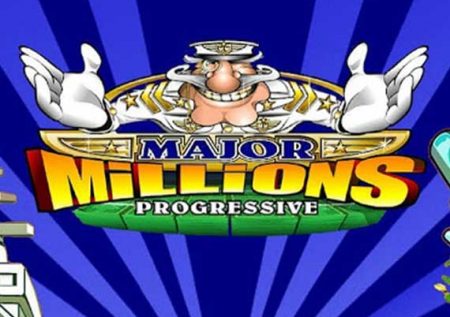 This online slot has many exciting features, and one of them is the possibility of trying it out and playing it in free (demo mode) here on our website.

We already mentioned that Major Millions is a military-themed classic slot. If you are a fan of flashy animations and extraordinary visual effects, this game will not impress you. In fact, you will find simplistic graphics with funny symbols and easy and straightforward gameplay in this game.

The important thing to mention here is the rule for a progressive jackpot, as you will need to stake the maximum bet and cover all the paylines in order to qualify for the jackpot.

If you like to see the usual card symbols, you will be surprised to see that Major Millions doesn’t have any of those. Instead of card symbols, low symbols are military goggles, ammo box, medals, captain’s hat, top-secret envelope, airplane, military ship, tank, and face of a Major (we suppose it is a Major Million).

Still, there are Scatter symbols (Word Scatter) and Wild symbols (Major Millions picture). The scatter symbol acts as a multiplier, and depending on the number of those you manage to land on the paylines; you can get from three (3) to fifty (50) times your initial win.

Wild substitutes any other symbol in the game and multiplies the payout. One strange thing is the lack of free spins feature in the game but having in mind that you will quickly forget about this negative side of the slot any time you can hit the progressive jackpot.

The RTP of the slot game is pretty low, as it stands at 89.37%, but having in mind that these numbers represent a possible return on both standard payouts and progressive payouts. On the positive side, Major Millions is a low variance slot, so the less experienced players can expect regular small wins that will keep them happy.

The Verdict of Major Millions Slot

Major Millions is old, outdated, with low RTP, and offers no free spins, but it managed to survive the test of time, and it is still one of the most popular online slot games on the planet. Microgaming made a quality product that, despite a childish look, can make you a millionaire in no time.

We recommend this slot for all types of slot players. If you want to play it in free (demo) mode, you can try the Major Millions slot here.

Want to become a millionaire? Read our Mega Fortune slot review and find out all about this exciting progressive jackpot!

If you prefer cartoonish themes and slots that offer a lot of entertainment, you must try the Big Bad Wolf slot game.