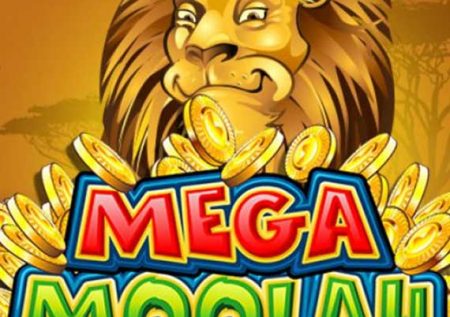 There are not many slot games with a reputation like Mega Moolah. This Microgaming title made into global headlines more than once, as there were several occasions when the players managed to grab several million dollar jackpots playing this game. Many professional casino players will say that this title is more lottery than a real slot game, but nevertheless, its popularity today is more immense than ever.

Mega Moolah is an African themed slot game that was released back in 2006, but even today, it is one of the most played slot games in the world, thanks to the progressive jackpot feature.

The theme looks like a bad Lion King rip-off, with symbols of African animals. The bigger animal you land on the reels, the bigger prize you may expect. It is a five-reel, twenty-five winline slot, without any particular extra features. The main kick of this slot is the randomly activated jackpot with four levels.

The RTP of the Mega Moolah slot is set at only 88.12%, which is below industry standard by far, but you need to take into consideration the jackpots. Still, we couldn’t found how those jackpots affect RTP, as the developer doesn’t give this information. Also, in terms of volatility, Mega Moolah is a highly volatile slot, which means that you can’t expect to win often, but once you manage to hit a winner, it could be huge.

The Verdict of Mega Moolah Slot

If you are a recreational player that loves to spin the reels from time to time and enjoy casual casino game, then Mega Moolah isn’t the right choice for you. This game can be a bit expensive to play and doesn’t provide anything spectacular except huge jackpots that appear from time to time.

But, if you dream of winning a million-dollar prize at an online casino, we highly recommend this slot for you, as there are no better progressive jackpots on the market. If you want to play it in free (demo) mode, to see if it fits your needs, you can try the Mega Moolah slot here.